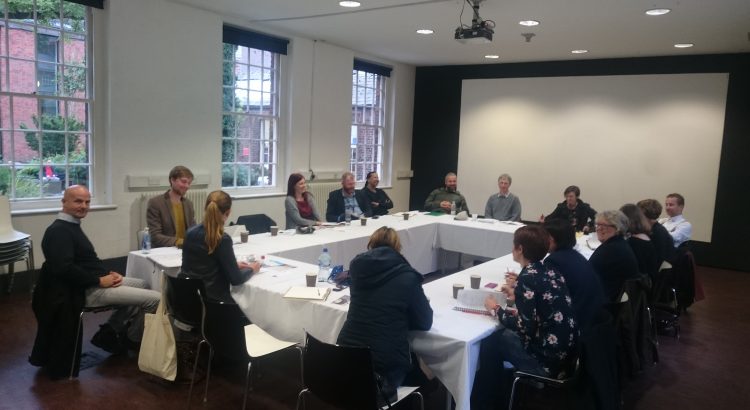 Have a read of Dean Freeman (Unity Works) great blog post about Wakefield Arts Partnership’s visit to COoL in September.

Thanks to Dean for the write-up.

In May 2016, Wakefield Arts Partnership hosted a public event to discuss the kind of group or organisation it may develop into, and how it could represent Arts Organisations and individuals in Wakefield.

We invited some guest speakers from other areas, including Bev and Jack from the snappily titled COOL (Creative Organisations Of Liverpool). COOL was formed in 2007 as a way of representing small / medium sized organisations in the city, with one eye on the legacy of the city’s successful Capital of Culture bid. It has since gone from strength to strength, currently with 30 members and we were delighted to be invited to shadow their September meeting.

Myself, Dean Freeman from Unity Works, and Kate Watson from Beam braved the brisk late September weather to catch the train from Westgate at a few minutes to 7am. A few hours later, we arrived at Bluecoat, a centre for contemporary arts housed in a beautiful 18th century grade 1 listed building with a huge offer including multiple gallery spaces, creative business and community participation programmes.

The meeting, which takes place monthly, saw the organisations share information on work undertaken since the last meeting, and a notable discussion was held on the various sub-groups that exist outside the main group. Members of the main group also participate in smaller groups, which lead on items such as Marketing & Advocacy, Development and the Festival Forum.

With a proven track record there was a clear enthusiasm and shared sense of purpose around the room that manifested itself in the fact COOL has so many members and active sub-groups. Wakefield Arts Partnership doesn’t yet have the numbers of dedicated members to undertake this amount of work, yet the scale of the work being undertaken and the level of shared working also outreaches our own, meaning WAP should not see this as negative.

It was interesting to see how the role of Jack as the group Co-ordinator worked. This is a funded role and as Jack updated the group on the work he and Bev (not at the meeting) had undertaken recently, it became apparent how essential that was. The work of the two roles cover differing areas, but combined they looked at funding opportunities, maintain the strength of the group by keeping in contact with the members, sharing and collecting information and – recently – working on a business plan for the group and completing work on the groups new website.

There were some interesting parallels with Wakefield; The Atkinson, a venue in Southport, was attending the meeting for the first time, and they were the first member from the Boroughs of Liverpool. Traditionally COOL has only represented Liverpool city based organisations, and this brought to mind WAPs discussions on its obligations (or otherwise) to Wakefield’s Five Towns and the organisations and artists within.

After the meeting, we spoke to Peter from Hope Street Limited who originally setup the group in 2007. I asked how important the shared purpose of something like the Capital Of Culture accolade was, and he agreed it was imperative. Within WAP, but also other groups such as Wakefield First, this same point has been noted, that a collective goal to rally behind is essential in getting the ball rolling. When I visited Sunderland on behalf of WAP last year, I was told the same thing in reference to their City Of Culture bid.

We offer our thanks to COOL for allowing us to snoop on their activities – it was certainly inspirational and gives us good guidance for developing WAP in the coming 12 months.

Your ticket for the: WAP visit to COoL blog post